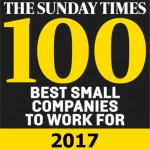 Following the success of the University being ranked 32nd within the Top 100 Best Not-for-Profit Organisations to Work For List in 2016, it has been decided to apply for a place in the 2017 List.

The Best Companies timescale commences with a survey being sent to a random 30% sample of our staff (who will be selected by Best Companies so that the staff groups are representative of our overall workforce) w/c 3 October. The survey will be open for an initial period of three weeks although this can remain open until 11 November if the requisite 33% response rate is not reached in the initial 3 week period. Communications will be more ‘business as usual’ this time as staff are more aware of the Top 100 process and reasons/benefits for applying. The University will be informed late December whether it has gained a place in the List although the ranking on the List is not made known until February 2017.

The University has received reputational benefit from being in the Top 100 List for 2016 from both existing and new members of staff, from students (recognition of the Top 100 Best Companies has been remarked upon by prospective students and parents at student Open Days) and has resulted in numerous requests from other Universities who are interested in the University sharing the experience of being the only University in the List in 2016.

At a time when Universities are facing external challenges and pressures ,it is even more important to build on the reputation of the University as an excellent place to work and study and to continue to be a resilient and strong institution.